I have been home for a few days now, starting to settle into my new house and enjoying the company of my Maine family. And what a treat to come home to 70 degree weather in Montana!

The last few weeks was some of the toughest and most beautiful of my racing career, for every part I am grateful. The first two weekends, Fontana (read about Fontana below) & Bonelli, my XC race’s were two of the toughest to even finish, as my body struggled to turn over my pedals on the steep sections, and all I felt like I could accomplish was to try to recover where it flattened out. My legs hurt so badly and my mind struggled because I was struggling physically. To finish those races was humbling and difficult, when it seemed like it would be better to DNF than to accept a lackluster performance. The disappointment was difficult to control after how much I invested into being ready for those races and how many people are invested into my racing. I’ve decided that I’m entitled to cry as much as I need to and it’s ok (once back at the hotel that is), as it’s really all part of the process. I am grateful that the pressure that I put on myself comes from within, and everyone else was only encouraging and supportive. It is impossible to pinpoint what caused my body to feel that way, maybe I was more tired than I realized.

Short Track followed each of those races on the next day. Each of my Short Track races went well, and encouragingly my body was able to sustain the efforts. Winning Fontana (below) and taking 6th at Bonelli. The Bonelli Short Track is one of the most tactical races, and our field was deeper than the proceeding ST races. I have a lot to learn about tactical racing and this was a great one to practice on, as positioning is everything with the front group remaining about 10 ladies through most of the race, and finishing times being fractions of seconds.

After Bonelli, I traveled with Chloe and TJ to Berkley, CA, where we stayed with Chloe’s grandparents and prepared for Sea Otter. I rested a bit more and enjoyed the hilly rides around Berkley. At this point in my trip, I was missing my family a lot, especially Layla, and that tugging on my heartstrings was getting stronger. I knew I had one last shot to get me home on a positive note, so I put my energy into one last attempt for a solid race weekend.

We arrived at Sea Otter early Thursday. My Pivot Les 29 (pictured above) was getting launched at the Pivot booth, and I was one of few who had ridden it or raced it prior to the launch. Following the Les launch, we attended the Stan’s NoTubes New MK3 Wheelset launch and 15th year party. These two companies have shown the most incredible support along with incredible product, I couldn’t be more grateful! After sneaking in a pre-ride, Chloe and I got cleaned up for dinner with our KASK family…Nat Ross, Sonya Looney, Courtenay McFadden, and Rebecca Gross. Such a pleasure meeting Sonya for the first time and catching up with the others.

Friday morning was short track. I made some adjustments to my pre-race warm-up routine, really made possible by having trainers from Feedback Sports to warm up on, and I liked how my body responded. After loosing positioning at the start, and a congested first lap, I ended up chasing and it ended up being a solid effort, but crossed the line in 11th. Chloe on the other had, took another short track WIN. I have a few things to learn from this tactically savvy racer who I am honored to be teammates with.

The Cross Country race Saturday morning ended up being one of the best performances of my career. I rode on the limit of feeling like I was going to explode the entire race, which lasted a short 1 hr 11 min. My system functions were back in full force, the feeling was sweeter than I could have even imagined after the previous struggle. Snatching 5th at Sea Otter will remain an lifetime inspiring highlight to me. 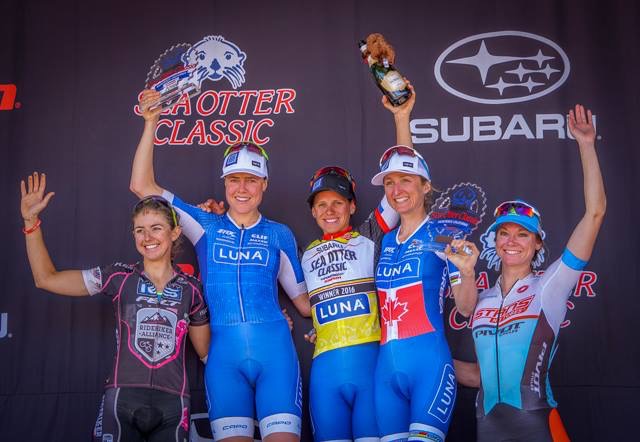 I raced just off the lead group the whole race, they were just within reach, but I couldn’t quite bridge the gap that opened at the start.

There is no question that I earned my spot on the podium that day, but learning to be self-confident has been a process I continue to struggle with. As riders like Erin Huck, Chloe Woodruff, and Ren Chengyuan each had slight issues that set them off pace, I found myself making excuses for my podium because of the issues encountered by these riders. I know that most of us struggle to a degree with having confidence, but I’m learning the importance of having true confidence and the power that comes with that piece.

Layla is such a trooper. She handles being separated from me like a champ. It’s not easy for any of us, but this life is all she knows, and we are both empowered by what this life has offered.

I am greatly blessed by the support from Nelson, which allows me to be away from home for these extended periods. I’m so thankful to Janet (mom-in-law), who traveled far and took great care of my precious daughter! To Chloe and TJ, who at this point have become more like family, lol! To Team Stan’s NoTubes-Pivot and all who support the journey!