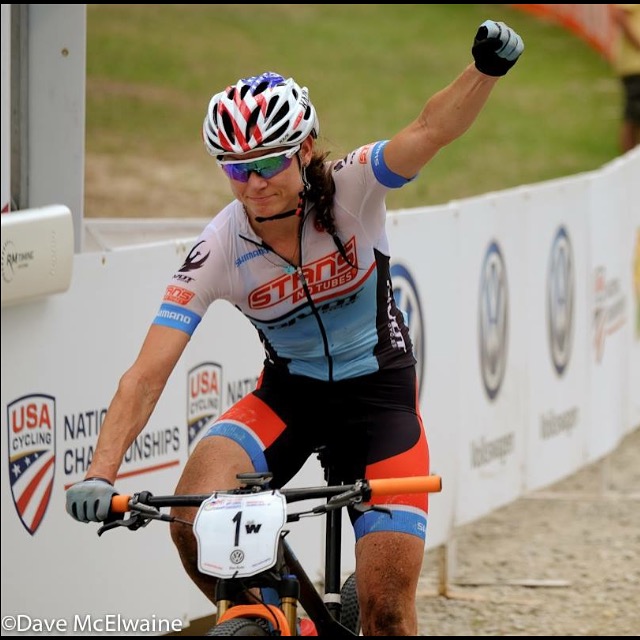 Another weekend and another win for team Stan’s-Pivot. I can not emphasize enough, how blessed I feel to have the opportunity to travel and race my bike with the support of team Stan’s – Pivot. This race was confirmation that the Columbia County, Georgia 60 mile course garnered one of the toughest races I have ever raced. I thought it was hard last year, but this year with an increase of at least 15 degrees in temperature and much higher humidity from last year, no relief was offered.

I had the benefit of staying with a host family, who are very involved with the marathon mountain bike race, David and Tammy Funk, and they really doted on me from meals, to bike assembly, as well as feed zone support. They made my stay comfortable and spoiled me greatly.

My bike delivery was delayed by a day, so I was able to borrow a bike for a short pre-ride on Thursday (Thanks to Tammy). By Friday, I was very happy to have my Pivot Les 29 back under me, and completed another short pre-ride joined by Duncan McGuire who so graciously traveled to support me during the race and insure that my Stan’s Valors were set up with the very best Maxxis tires for the course (turned out to be the Ikon). The pre-rides were hot. Fortunately, the course was mostly under foliage and received some breeze from the nearby lake, but with the high humidity, the shade doesn’t offer the same relief that it does at home.

Saturday was hot! I’m gonna repeat the heat multiple times because it’s the first thing I think of when asked how the race went. By the 9am start it must have already been pushing 90. The pro men started 2 minutes in front of the pro women. I was definitely disappointed to have such a small women’s field,  but appreciative of each lady who stood with me on the start line. Marathon nationals has been an A race on my calendar from the beginning of planning the season… hopefully better attendance next year. Regardless, I was hoping for a solid day of racing, and by starting sandwiched between the pro men and men’s masters fields, I hoped to have some company. About an hour into the race, I started spotting a few riders in front of me, of which I was able to get around. The flowy trails in the first half of the race were fast, yet still required pedaling the whole time. The Pivot Less 29 was smooth and fast and the Maxxis Ikon tires prevented sliding atop the slick pine needle covered trails.

Clif Bar hydration mix,  energy food pouches, and electrolyte tabs every 30 or 40 minutes was what saved me going into the second half of the race. From fast and flowy, the trail changed to slow, zigzagging, rooty trail that was the biggest mental test of the race. I kept reminding myself to stay focused. Whenever I lost focus, I would start feeling how much my feet hurt, the developing blisters on my hands, and my soaked with sweat skinsuit combined with the rough trail was starting to create saddle sores. I said a few prayers as I rode alone. As the temperatures continued to increase, I could feel the heat and began to take precautions to finish well by staying efficient, fueling more, and focused on pacing myself. By the time I reached the 3rd feed zone around mile 40, the roughest trail sections were over. Being greeted by my loyal supporters who stood out in the blazing sun on my behalf, retrieving a fresh ice sock for my back, chugging an additional cold bottle of water, I was motivated to finish strong. The trail smoothed out and a little section of pavement gave some relief to the relentless course. I had a few riders from the masters men’s fields pass me during this portion of the race a little over 3 hours in, which was kind of nice and helped me to keep accelerating as much as possible.

As I pedaled the last 5 KM of double track, I started to feel droplets of water hitting my knees as I pedaled, and I wondered if it had started to sprinkle rain until I realized that my braid had become so saturated with sweat that it had started constantly dripping. Grose, I know…. But that was a first for me.

After about 4 hours and 50 minutes, I crossed the finish line, looking like I had just jumped out of a lake, and securing the stars and stripes for another year for myself and my team.

I am living out an incredible divine story, and my heart is so full of gratitude to each person and each company that I am honored to be associated with. We are a team, and the teamwork and camaraderie is leading to a highly successful season for both Chloe and I. I am a blessed women to be on my way home to Montana where my husband and daughter anxiously await my arrival. Team Stan’s-Pivot will meet up again for the Carson City Off-Road in two weeks, where I will race the last of the Epic Rides races, as well as the last of this endurance race block.