The weekend of June 17-19 tied up the third and final race of the Epic Rides series in Carson City, Nevada. The race in Carson City was added to the series for the first time this year, so it was a new course for everyone who raced. As the series leader heading into Carson City, I made the decision to attend Carson City and skip my hometown HC US Cup race in Missoula, Montana, in order to secure the overall series winner and earn some additional cash to assist in my trip to Mountain Bike World Championships which I happen to be leaving for this afternoon. In addition, my beloved sponsors; Stans NoTubes, Pivot Cycles, Shimano, and Maxxis, all held large roles as event sponsors, and I was honored to represent the team.

The Epic Rides weekends have consistently been my favorite race weekends so far this season. More than the epic courses or the incredible prize purses, I give credit to the people who make these weekends so great; particularly the other ladies. We all show up to push limits and accomplish goals, and we have a blast doing it. The friendships that I have made are some of the best that I have, and in a way we are a family who join together to support, encourage, and inspire one another as we all reach for greatness. We room together, ride together, eat good food and drink coffee together; then on race day, we race as hard as we can against each other.

Having Katerina Nash present this race weekend gave the races a new challenge that I had been lacking the last couple of races, and having her there to push me gave me some solid prep for Worlds. The weekend schedule stays consistent for each Epic Rides race, so as usual, the fat tire criterium wound through downtown Carson City on Friday evening acting as the weekend opener. Katerina held a sprint to the finish that I was unable to beat, but the effort was legit and always appreciate racing her level of talent.

Pre-riding seemed more challenging on this course due to the amount of climbing and trying to stay somewhat rested, so I studied the course profile intently, but ended up racing most of the course sight unseen. My Pivot Les 29 was my bike of choice for Carson City, with Valor Carbon Wheels, and EXO 2.2 Maxxis Ikon tires.

The race began with a long fire-road climb of which started out as a lower gradient, but toward the top turned into a wall of steep pitches that after two hours of climbing at threshold started to really add up. Katerina, Amy, and I climbed together all the way to the top. Even while racing, the views of Lake Tahoe and the surrounding snow capped mountains where incredibly beautiful from the Tahoe Rim Trail. Once the single track descent began, it was all I could do to stay on Katerina’s wheel to follow her lines of which she was familiar, but it was apparent she was descending much faster than I. The gap between us grew quickly, and soon she was out of site. Without knowing the trail, I aired on the side of caution, and descended conservatively to assure I kept it upright in the loose sand and blind corners. The words that have been engrained in my head repeated themselves over and over “Race Forward”, as a hard charging Amy Beisel wasn’t about to let up without a fight. Before the final descent, one more 4 mile climb presented the last opportunity to close any gaps. I began to catch glimpses of Katerina ahead on the switchbacks that zigzagged across the mountain, and although I gained some time on her, it wasn’t enough before descending back into town, spreading us out again by a few more seconds. Doubling up with two seconds over the weekend, both to Katerina, keeps me honest and challenged, which is the perfect place to be as I head to the Czech Republic. 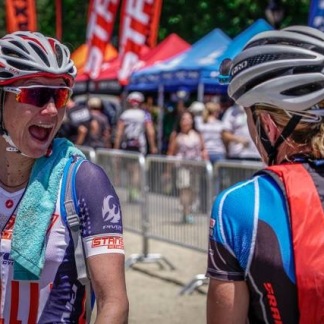 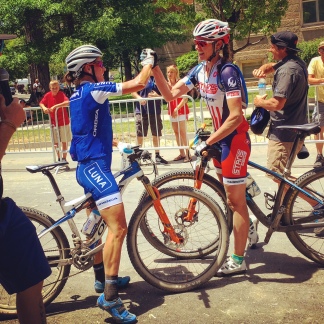 Finally, I am very thankful to have the support of Kenny of Stan’s NoTubes at these events. With his help, we have had a series of successful races, and I’m really humbled and honored to be a part of team #stanspivot.

I have been home for a week and the time has flown by. With a plethora of household chores to complete, training, preparing to be gone for Worlds, and taking some time for the family, the time vanished. Somehow, everything gets completed, and I am really excited for the opportunity to be joining Team USA at the World Championships where I will also meet up with my teammate Chloe, who was just named to the final Olympic team as one of two who will race in Rio!